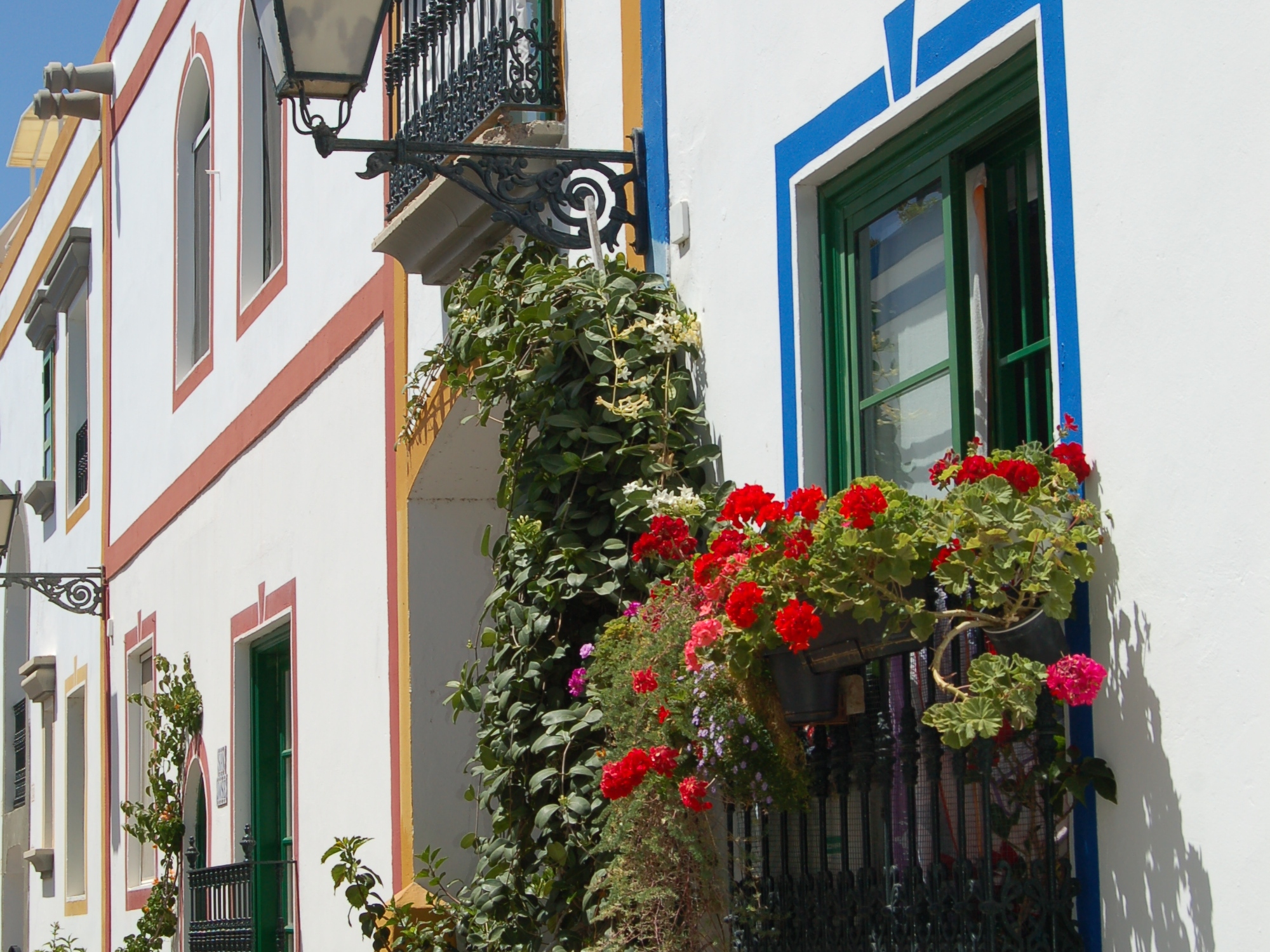 From soaking up the rays of sunshine on Amadores beach to witnessing bank robberies in Sioux City, there was never a gloomy moment in Gran Canaria.

A favourite with couples and families due to its calming and peaceful setting, Playa de Amadores is known as the “Lovers Beach.” 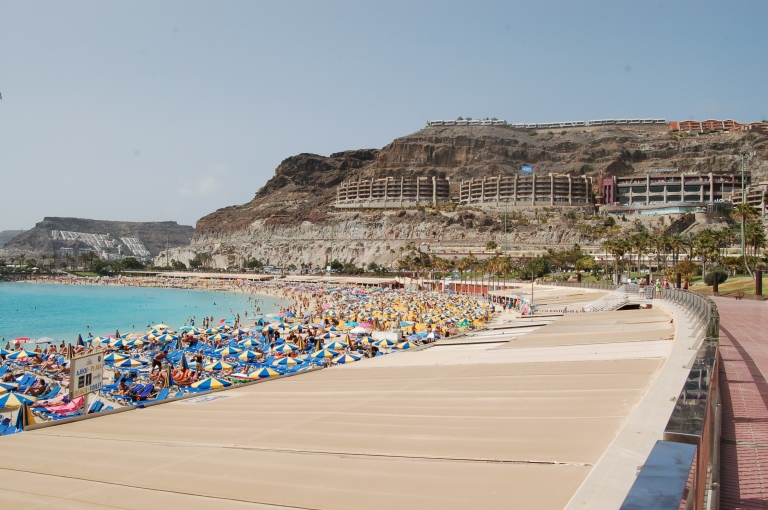 Awarded the blue flag in 2004, with 800 metres of golden sand and topaz coloured waters, this beach is paradise.  Just a short stroll from our four star hotel Gloria Palace, we spent many pleasurable days sunbathing and swimming in Amadores.  Even on a clear day the majestic peak of mount Teide in Tenerife can be seen.

With big inflatable slides on the water and the fact that the beach is sheltered and protected from the wind, makes it ideal for families with small children.  It was reassuring knowing that the kids are safe going into the water that isn’t too deep.  It is considered one of the largest outdoor pools in Gran Canaria.  Restaurants and cafes are dotted along the beach dishing up a good selection of sea-food and tapas.

Canals link the fishing village to the harbour which led to Mogan’s nickname “Little Venice.”

Just a short ride in a taxi from Amadores on the South-West coast of the island of Gran Canaria is the picturesque port of Mogan, a popular beach, a fishing village and many fashionable shopping boutiques. A big hit with my kids was a shop called Ale Hop, much like the store Flying Tiger, selling beach wear, stationery, shoes and souvenirs to bring home to the family. 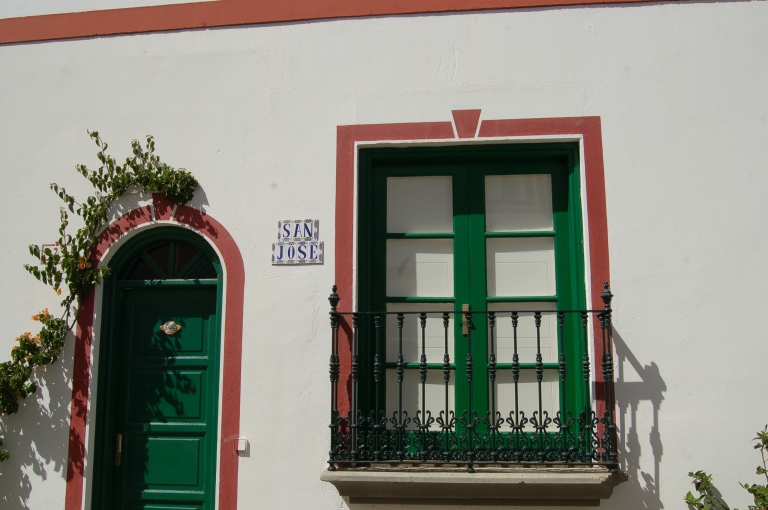 After browsing the shops we stopped for coffee and Churros dipped in hot chocolate, a firm favourite with the locals.  Churros are a traditional snack of fried dough pastry sprinkled with cinnamon and sugar.  Later we swam in the sea and hired out a pedal boat for an hour, exploring the beach of Mogan.  I couldn’t miss the photo opportunity of snapping away at the pretty Bougainvillea flowers and the many colourful villas that surround Mogan.  Every Friday there is a market in Mogan and it brings in people from all over the island.    As we wandered along the harbour admiring the view, we got hungry and decided to order seafood paella accompanied with a refreshing drink in a one of the lovely little restaurants.

Mogan has top quality restaurants and an attractive harbour, it’s no wonder so many tourist flock to it every year.

The wild west of Sioux City

Bank robberies, buffalo stampede and knife throwing are just some of the shows performed at Sioux City

It all began with the horse whisperer followed by a stampede of buffalo through the town.  A drunken cowboy staggered in the street witnessing a bank robbery and nearly got caught in the shoot-out, resulting in a lone man falling from a height into a passing cart.

We swiftly proceeded indoors to eat and watch another show of knife throwing, a pub brawl and more shooting.  I was left gawking as the fire lit knives were being flung at the very brave Dolly.  In the evening time Sioux City has cowboy shows, BBQS and Western Dancing.

Also in this wild-west town is the new reptile, amphibian and spider exhibition, the largest display of poisonous reptiles in Spain.  In between shows we strolled around the city to visit the goat farm, the county jail, the chapel and the bank. 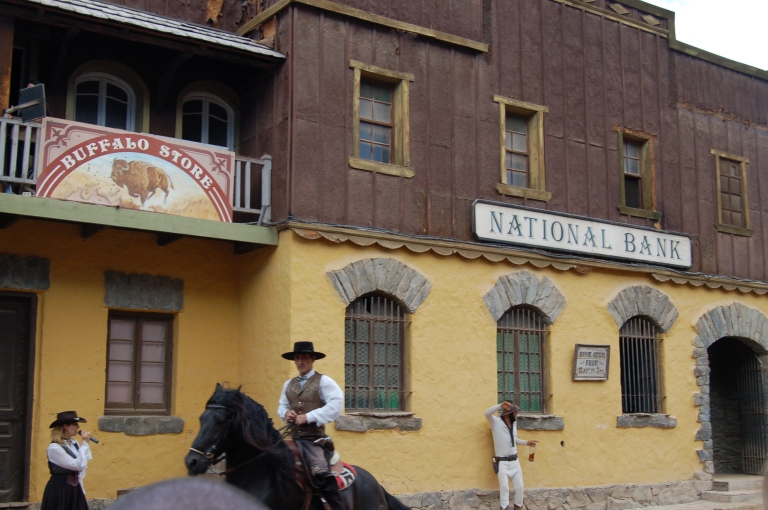 In Gran Canaria, there are many sights to see, such as the Maspalomos Dunes, Aqualand, Dolphin and Whale Watching, Sioux City as well as the beautiful beaches of Amadores and Mogan.

For more information on Sioux City, log on to http://siouxcitypark.es/

We flew with Tui holidays, for more information log on to www.tuiholidays.ie