My family and I travelled from London to Disneyland Paris by Eurostar in just under three hours. 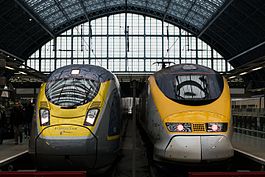 The Eurostar is high speed luxury travel and we boarded at St. Pancras International station London and arrived at Paris Gare de Nord.  Our tickets were bought online and chose our seats beforehand, so the family would not be split up.

With two main parks, that is Disney park and Walt Disney Studios, we spent two full days exploring magic of Disney and shopping on Main Street USA.  Our tickets were bought from the Travel Republic website and if you buy online, you get a discount.

My kids loved the Pirates of the Carribean ride, buzz light year later blast and also It’s a Small World, where the miniature dolls dance and sing in different languages throughout the world.

Also in Disney Studios, the cinemagic was out of this world, where the characters come to life on screen.  However, the Armageddon ride was not so popular with the kids with fireballs shooting flames and water spraying from sprinklers, a little too scary!

In the evening time Disney would put on a parade of all your favourite characters and at night there is a fire works display, which lit up the whole enchanted castle.  Simply Magic!