Universal Studios Florida is a once in a lifetime family holiday package.  With so many rides to choose from the kids didn’t know where to start.   In order to skip the massive queues, we bought five fast passes, not cheap, but well worth it.  The first ride we tried was Shrek 4D, funny and entertaining, it told the story of how Shrek and Donkey tried to escape Lord Farquaad, while rescuing princess Fiona.  The seats moved and water sprayed at us, as we embarked on this wonderful journey.  Once Fiona and Shrek were safe, Donkey and his beloved dragon flew off into the sunset.  The next ride we tried was a bit more daring than the last, that was the Minion ride, the whole audience transformed into minions and went on a virtual roller coaster and at the end to be transformed back into humans, much to the disappointment of GRU, our master.  The kids enjoyed the Minion ride so much they went on it three times.  After a stroll down Hollywood Boulevard we stopped off for lunch in a quaint French boulangerie for some typical baguettes and miniature pastries.

Simpson land was very interesting where they sold a brand of Duff beer much to the delight of the kids as they wanted us to drink it.  We once again skipped the queues on the Simpson ride and went on another virtual roller coaster.  As the kids had enough stimulation for one day we decided to go on the ET ride, a lot slower but not enough excitement for them.  One of my favourite rides was Jimmy Fallon from NBC Studios racing through New York, we were serenaded by men in suits while waiting to board the fast car.   Our day was coming to an end and we walked through Harry Potter land and purchased an old fashioned ink and quill set.  That evening we dined at a Mexican restaurant just outside Universal Studios and I drank a beer (not a duff one) to celebrate my birthday. 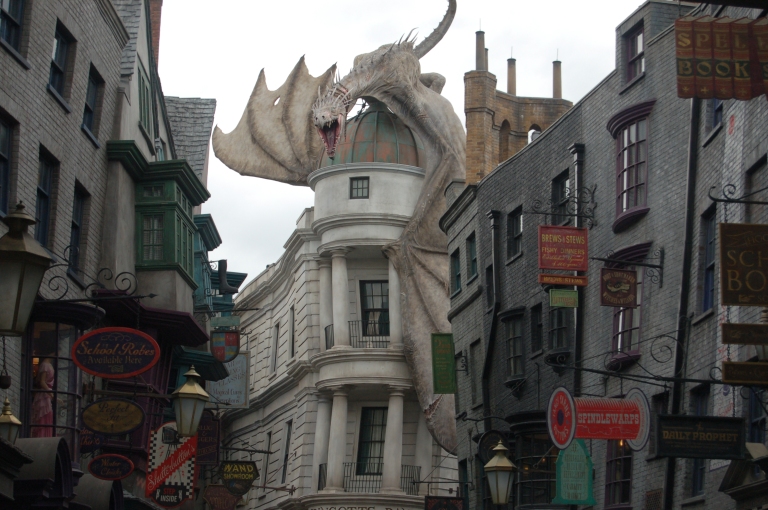 The whole family were exhausted after Universal, so decided to rest for a few days before heading to Islands of Adventure.  This attraction is much more suited to families of all ages.  Harry Potter land was also in this park as the train transports passengers between Universal and Islands of Adventure.  We walked through Seussland, a very quirky place with stories about the Cat in the hat, The Lorax and On Fish, two fish.  Some of the characters such as Thing 1 & 2 performed to the younger kids.

Jurassic park in Islands of Adventure was out of this world, with many facts about Dinosaurs all those years ago roaming the lands.  I had read about the ride on a boat with the dinosaur’s chasing you and you drop from quite a height into water, so I decided to give it a go with the family.  A young boy seated next to me gave a running commentary on what was coming up next, I did not realise when we got to the top that it would be so quick and felt I was falling out of my seat.  Never laughed so much at the picture later, that boy was staring at me like I was mad, as I made some funny faces.

We feasted that evening on crispy fried chicken, Jambalaya rice and jumbo shrimp at the Bubba Gump shrimp company.

Orlando parks Florida are one of the best in the world.  We booked our holiday through American holidays and for more information log on to http://www.americanholidays.com